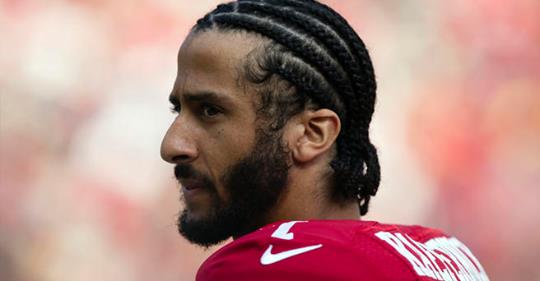 A few weeks have passed now since the media maelstrom surrounding the Nike/Colin Kaepernick controversy took over the Internet. This story has taken the predictable trajectory I’ve come to expect with things like this: Big news breaks, everyone overreacts and gets angry on Twitter, and eventually we settle down and make Dwight Schrute parody memes.

I’ve found that the parody meme season is a good time to talk about these touchy subjects.

Just in case you’ve been sleeping under a rock for a couple years, here’s the summary: Kaepernick was a popular NFL quarterback who started kneeling during the national anthem to protest police brutality and racial injustice. He ended up getting cut from his team, and no other franchise has offered him a contract since then. Many people believe these teams are unwilling to sign Kaepernick because of the controversy and media attention they would likely receive every week along with his protests.

The assumption, then, is that Colin essentially sacrificed his dream to stand up for something he believed in. Nike noticed, paid him a ton of money and now Colin is the face (and voice) of Nike’s latest advertising campaign.

This is a very big and nuanced story. Around half of our country is applauding Kaepernick for taking this stance, while the other half is angrily burning their Nike shoes and cutting logos off their socks. Although Kaepernick’s protests have always been about racial equality and police brutality, some view his actions as unpatriotic and disrespectful to our flag and our military.

Wherever you stand on this controversy, I’m not here to change your mind. For the folks who are really passionate about this, I couldn’t write an argument you haven’t already considered. However, whether you love or hate Colin Kaepernick, I do think there are lessons we can all takeaway from this story if we’re able to look at it objectively—and even consider some biblical parallels.

Do the Hard Thing.

The Bible is full of stories of people who took big risks for what they believed in. Noah built a big boat before it started raining. Rack, Shack and Bennygot thrown into a fiery furnace for refusing to bow down to a chocolate bunny (or something like that), and their friend Daniel was tossed into to the lions’ den for rebelliously worshiping his God.

All of those flannel board stories we learn in Sunday school generally have the same narrative arch: One of our biblical heroes is confronted with a difficult choice. Usually they’re faced with a decision to either obey and worship God, or fit in with the culture around them and sacrifice their beliefs.

Noah, Shadrach, Meshach, Abednego, Daniel and several others all got rewarded for their loyalty. Instead of being killed or facing horrible consequences, these flannel board all stars live happily ever after and eventually get VHS videos featuring dancing vegetables made in their honor.

John the Baptist got beheaded.

Nearly all of Jesus’ disciples were martyred for their faith.

Paul spent five or six years in prison, and then was beheaded.

After living a perfect life and demonstrating unconditional love, our Savior and Lord—the Son of God—was brutally crucified.

For Bible characters, famous athletes and the rest of humanity, doing the right thing does not guarantee a happy ending.

Here’s one thing I can’t get passed in this Kaepernick situation: When he started these protests in 2016, he had no idea how his story would end. The odds were pretty high that he wouldn’t get beheaded or thrown into a deadly fire, but I don’t think he had a clue he would receive this much attention.

In fact, he didn’t at first. Before the first two games of the 2016 NFL preseason, Kaepernick sat on the bench and did not stand with his teammates during the anthem.

And no one noticed.

It wasn’t until his third protest that the media took note and this whole thing began. He didn’t loudly announce his campaign in a high-profile interview. I doubt his jersey sales were at the front of his mind when he started sitting.

If you told Kaepernick in August 2016 that he would be paid millions and be featured in a high profile Nike ad for his actions two years later, I’m not sure he would believe you.

However, he likely also wouldn’t have believed you if you told him he would be cut from the 49ers and no one else would give him a chance to play football ever again.

His story is obviously a unique outlier, but in a sense, we all face similar situations all the time. When we’re confronted with difficult decisions, we have no idea how the future will pan out. If we take a stand (or seat) for a controversial belief we have, in that moment we don’t know if we’ll be honored and applauded for our courage, or torn down and ridiculed for our convictions. Will you be called a hero, or a traitor? Will you earn a ton of money and spotlight, or lose your dream job—or both? Will anyone even care or notice that you’re standing (or sitting) at all?

Before any of this Kaepernick stuff ever started, the words of Nike’s new campaign really should be a slogan for Christianity, not shoes:

Believe in something. Even if it means sacrificing everything.

In the moment, we rarely know ahead of time if any given action will result in us “sacrificing everything”—but let’s say we did. If you knew for sure you would lose your job or miss an opportunity or even be killed for your convictions, would you still go through with it? What do you believe so strongly that you’d be willing to sacrifice everything? Is there anything?

The Christian life is hard. Jesus asks us to do all sorts of things that aren’t popular. Sometimes when we obey, we’re rewarded with safety and promotions and applause. But sometimes His commands leave us on the other end of the spectrum, and mature believers need to be ok with embracing either reality.

Regardless of outcome, we must stand for what we believe to be true. Instead of cutting out logos from your gym socks, this may be a good time for us to consider what convictions we have that are that strong, and maybe also reevaluate how we treat others who boldly speak out about their passions.

We live in a difficult and complicated time where the line between right and wrong (ironically) seems both more rigid and yet blurrier than ever before. I think it’s important for us to know and figure out what we believe and where we stand so we’re prepared when those big moments come.

No matter what you think of Colin Kaepernick, we would be wise to join the side of biblical heroes and historical icons who did whatever it took to stand up for their beliefs—regardless of the outcome.

You may never get a vegetable TV show or Dwight Schrute meme made in your honor, and you likely won’t be Nike’s next big spokesperson, but those should never be our primary motivators anyway. Live a life you’re proud of—modeled by Scripture—and the only Audience that really matters will certainly take note.