After months of anticipation and exhaustive NBC cross promotion, Jimmy Fallon is finally the new host of “The Tonight Show.” Even though he has enjoyed a really incredible amount of success in the past few years, the pressure is on now. Jay Leno led an impressive 22-year run with great ratings, and the 2009 debacle with Conan O’ Brien has to be haunting Jimmy’s dreams.

Everyone has critics, but so far the reviews of the new Tonight era seem overwhelmingly positive. Does he really have a chance to keep one of the best gigs in show business? What is that sets him apart? 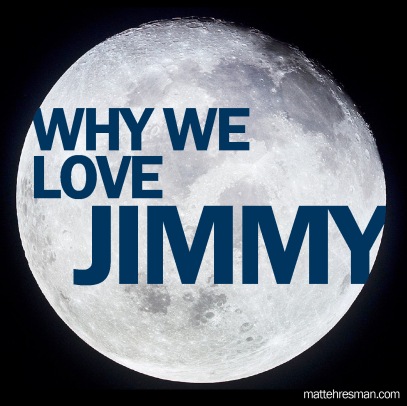 It probably doesn’t hurt his chances that he is BFF with Justin Timberlake, but I think something about Jimmy makes him more of an everyday guy that we can all relate to. Along with his “normal” upbringing (last night his parents seemed amazed that he even graduated high school), Jimmy is just as surprised as anyone that he landed this job. He legitimately seems to be soaking up the moment every time he hits the stage. There’s an overarching feeling of gratitude and humility on Jimmy’s show that is a welcome alternative to so many other TV personalities.

In his first opening as host, Jimmy spent a few minutes introducing himself and giving a quick look at his biography—even introducing us to his parents. For someone who has won an Emmy, a Grammy, authored two best-selling books, and been a staple on “Saturday Night Live,” something about his humble and unassuming introduction felt very refreshing.

Will Smith was Jimmy’s first guest last night, and he shared some valuable advice for Jimmy and the rest of us:

“Keep loving people. Your art is a gift to people to help their lives be better and be brighter. What happens a lot of times when you see people fail in this business, they’re in it for their ego and they start doing it for them. No, you’re just trying to help people get through the day.”

Jimmy shared a similar sentiment in his monologue, saying that his goal for the show is to help us go to bed every night with a smile on our face. Despite the crazy amounts of success and the millions of YouTube hits, his biggest desire is to simply be our friend.

While confidence and a healthy self-esteem are important, I think a lot of us quickly tire of stars in our culture today like Richard Sherman and Johnny Manziel who repeatedly remind us how great they are. Leno did a great job on “The Tonight Show,” but over the years his sense of entitlement became hard to ignore. Putting the Conan situation aside for a moment, his last few months on the show became an almost constant jab at NBC for kicking him off the air. He said he was happy for Jimmy and they appear to have a good relationship, but you can’t deny that Jay was dragging his heels thinking he had several good years left.

Of course no one knows how long Jimmy will last or who will be his eventual replacement, but I imagine he will be much more likely to bow out with grace and gratitude. Assuming his show continues with the success most of us predict, I hope he heeds Will Smith’s advice and stays focused on humility and authenticity.

While most of us will never see that amount of success, I think we all can learn from Jimmy’s approach to fame. Just like Paul’s words to the Romans, we need to remember to “not think of ourselves more highly than you ought, but rather think of yourself with sober judgment, in accordance with the faith God has distributed to each of you.”

One of Jimmy’s most popular bits on his old show was his weekly “Thank You Notes,” where every Friday he started the show saying thank you to celebrities in the news. I hope his attitude of gratitude continues, and I pray that all of us would follow his lead.

2 thoughts on “Why We Love Jimmy Fallon”